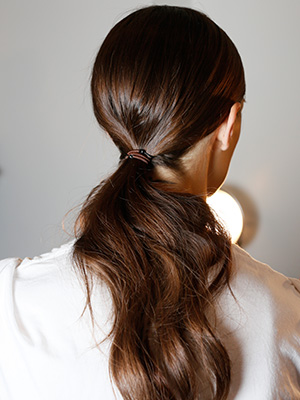 It’s officially fall, which means summery highlights are giving way to rich brunette shades. If you already have light-brown hair, congrats! You have it a bit easier than the blondes of the bunch. Elle Fanning recently went from inside-of-a-banana-peel blonde to a milk-chocolate shade of brown. Her colorist Jenda took her darker for her role in Trumbo (the Dalton Trumbo biopic starring Bryan Cranston), and she gave us some genius tips for going brunette.

Flatter your skin tone. „Elle’s skin is so fair and beautiful, so I had to cater to it,” says Jenda. „I looked at her eyebrow color and her skin tone in order to make the shade flattering.” Jenda recommends having a conversation with your colorist about whether you should go for cooler or warmer shades of brunette, so booking a consultation is essential. „Clients might think they want a warmer shade or think they’re seeing a warmer shade in a photo when actually it’s more of a neutral or cooler tone.”

To pick the ideal shade for your skin tone, Jenda says the best way to match color is to use swatches. „Hold those swatches up to your face. I tried a few different hairpieces on Elle. You can look at a photo and love the color, but then the result can be shocking.”

Keep your hairline lighter. Going dark doesn’t mean getting rid of all lightness in the hair—especially around the hairline. Jenda says keeping that area lighter makes the color appear more natural. „Whether you’re a dark blonde or a brunette, everyone naturally has a lighter hairline. Plus, it’s easier to make the change when you keep some lightness around the face.”

Avoid solid color. „The biggest mistake someone can make is putting one color all over—getting a single-process brown. For Elle’s color, I layered many different shades all over her hair with foils, from a golden blonde to a darker brown. People on camera can’t have a solid blanket of color. They need dimension!”

To get a multitone brunette, don’t book your appointment as a single-process allover color appointment. Instead, get several shades of lowlights in different tones and add a glaze to help enhance the dimension.

This post is part of a content-sharing partnership with PopSugar. The breast augmentation journey doesn’t end at surgery. There are a lot of questions that arise after the…
Mai departe

Focusing on Eyelid Surgery in Romana

Over the years, eyelids can start to sag. Not only can they make a person look older, but…
Mai departe